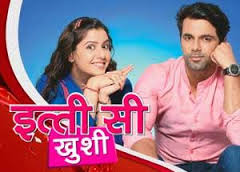 Neha and Aman’s mehndi ceremony is going on. Mehndi ni mehndi plays in BG. Neha gets her mehndi with Aman’s name. The day after engagement has finally come and she dances with everyone. The reporter says, the mehndi is going on and Aman is angry on Neha.

Offscreen, Aman says, he can’t forgive Neha all the time. Neha tells about teacher and student relationship and Neha tells everyone that Aman Sir is her boyfriend. Neha shows her mehndi design. The reporter says we are sure Neha will get Aman rid of his annoyance.

SASURAL SIMAR KA: KAMIYA FIGHTS WITH HER OWN MOM