Raman gives tight slaps to Romi, Ishita tries to controls Raman but Raman beats black and blue out of him. Raman scolds Romi.

Reporter says, mahabharat have started again in their house, Raman has got the chance to become angry, his anger is on seventh sky and it is justified as Romi has done something very wrong. Ishita gave Romi one slap but Raman beat him a lot. Raman’s nature is like this that once he gets angry, he cols down after taking it out on culprit.

Off-screen Romi Laughs and says that see my bhabhi beats me. Toshi Bhalla says, I am very angry on Romi. Romi says sad part is that my bhabhi Ishita beat me today. Ishita says, everyone beats him.

On-scree, Mrs. Bhalla ask Raman to not beat Romi, its not his fault only and you can’t force him to marry Sarika, she is not worthy of it, she says if that girl comes in our house as daughter in law then you all will see my dead face. Raman shouts enough, today your warning will not work.

Reporter says, we have a gut feeling that Romi is taking someone else’s mistake on his shoulder so that Sarika’s respond doesn’t get tarnished, this all drama so that he can marry her and then after thinking we got the idea that maybe Parmeet is behind this disgusting act.

Off-screen Romi says, It is a big mistake, I want all to see, it has good message, boys do it in desperation but what girl goes through after that, what family go through after this.

Off-screen Ishita says, Mrs. Bhalla is supporting her son, she has this misunderstanding that Sarika is bad girl, whatever happened, Romi should have thought before doing it.

Reporter says, Raman has warned Romi and he will do what he wants and all family members have listen to him.

On-screen Raman says, enough of drama, now I will decide how to solve this matter, those who agree to him can stay in house while other can decide for themselves.

Reporter says, we might see Romi and Sarika’s marriage soon. 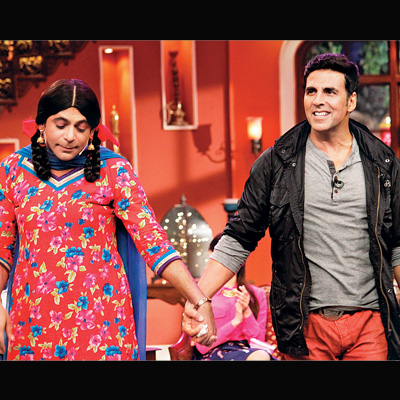 Sunil Grover is back in Comedy Nights with Kapil as Gutthi