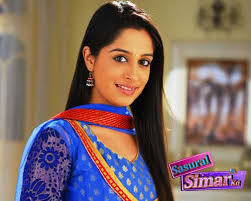 Reporter says first the phantom of sunnaina trapped herself in simar’s body and now wants to kill roli. Sunnaina tries to throttle roli. Ghost of sunnaina is in front of roli as sunnaina. Simar comes and says you got it right i’m sunnaina not simar.

Off screen, sunnaina says i’m angry because roli wants to send me away from my husband and daughter. Reporter says ghost of sunnaina doesn’t want simar to go back as she can stay in her body and remain with her family. Roli went to bring simar but sunnaina tries to suffocate roli.

Off screen roli says i have to make a plan and get simar out of this but I guessed simar’s hair will get stack or she might stay there deliberately. Sid says roli and simar used to solve problems of people only now they’ve got stuck with this ghost which has been imported from skies.